At the following lines I describe what it has been for me the best ski tour trip until now (en anglès per respecte a les nostres companyes d'aventura ;-)!).

It was quite hard to organize everything and to find place in the huts where we wanted to stay. Our first idea was to go from Zermatt to Saas-Fee, climbing Starlhorn the first day and Allalinhorn the second one. Finding that some huts where closed (Flu near Zermatt) and that Brittania was full, we decided to change the plan and we booked at LangFlue hut for two nights.

As it is becoming usual, I shared this new adventure with my friend Sam, and luckily we convinced two special friends that I met in Slovenia 2 months ago to join us. The fact that we disposed of two cars would enable us to go from one valley to the other without bothering about the public transport.

Everything started Thursday 30th of April when Sam picked me up in Girona, and after rechecking that we didn’t forget anything we headed towards France. Our first aim was Chamonix where we would plant our tent in the park where we had slept last year and spent the first night there. The driving was not easy at all, especially because we both have had a hard week and were quiet tired. I still can remember Sam driving at 2am, near Chamonix, telling me that he was so tired that he could hardly remember his name. After all, we found the park, and slept 5 hours before waking up seeing, the enormous Montblanc peak when stepping out of the tent next morning.

After drying up de tent and having some breakfast we continued our trip. We entered in Switzerland after passing the control in the borderline. They stopped us and asked if we were carrying drugs?! No way, they didn’t catch us!
We arrived at the meeting point (Stalden) a bit early and we decided to go until Tasch where we would ask some info at the tourist office and were we would met the girls. Brittania was still full for Saturday, but we would try the traverse from SaasFee to Zermatt by the Alder pass anyway. So, after meeting the girls we left Sam’s car in Tasch and went the four of us to SaasFee where finally we would put our skis on. 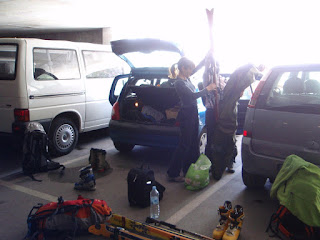 Before that, we were remembered to be in Switzerland and we had to pay again for the parking. We took almost the last lift to the top of the ski resort and we went towards Langflue hut (or I would call it better hotel – both for the price and the facilities it had).
After a great meal, and calming the nervousness of Sam ;-), we went to sleep in our private Edelweiss room with 4 beds. 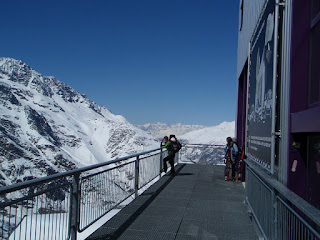 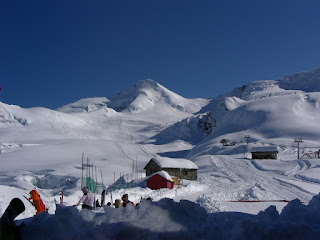 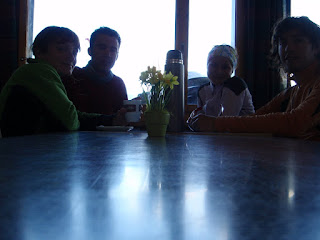 On Saturday, alarm rang at 4.15 because breakfast was waiting for us at 4.30. After many complains and having a strong breakfast, we got ready at 6.00 and we headed towards Allalinhorn, which would be all the time in front of us. We enjoyed the sunrise whilie climbing up through the tracks of the ski resort and after two hours ski touring, we left the tough retract terrain and submerge in a soft and paradisiacal snow powder sheet. 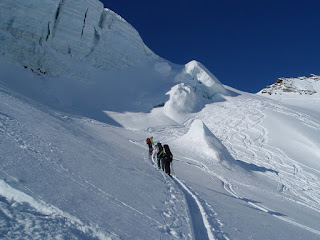 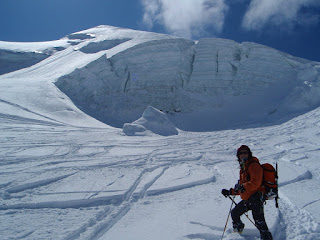 We pass by the spectacular glacier under Allalinhorn, and without the rope, we arrived at the col where I could saw Matterhorn for my first time in life. After some pictures there, we needed 30 minutes more to reach what is was, my second four thousand meters peak, and the first for some of members of the team. Great views from the top with Starlhorn, Matterhorn, Weisshorn, Montblanc, Monterosa standing out. 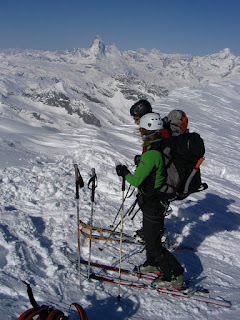 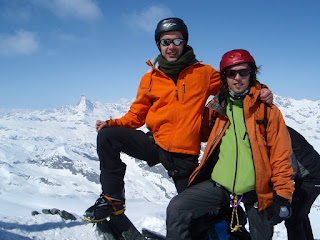 Luckily we were first on top, well actually the Crazy machine was, and after some minutes there, we could see the large amount of people that was coming up. Time to go down!!. Skins off, tighten boots and skis on and after some meters of crusty snow, we were delighted with the best powder of all the season. Paying attention on not falling into a crevasse and avoiding the ice blocks, we arrive at Langflue without believing what we just did!! 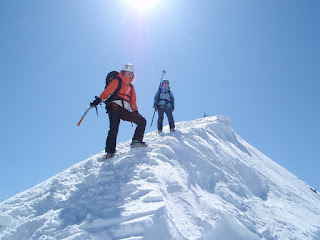 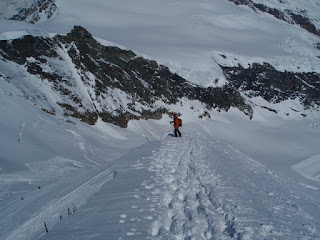 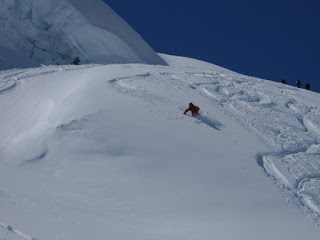 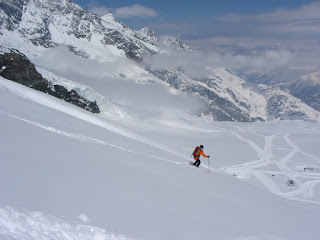 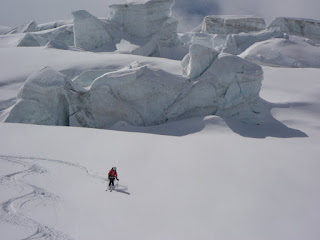 Last call at Britannia hut without luck, and we prepare our minds for the hard following day that was waiting for us while doing a long siesta ;-)!!

On Sunday, despite the eggs and pain, we received great news. Real Madrid 2 – FC Barcelona 6! Campeones oe oe oe!! There was not time to waste; a long day was waiting for us. This time we were ready at 5.30 and we started the route again through the skiing track. Before passing the tunnel, we put our skins off for a little descent, where I could observe how crazy one of our companions was ;-)!! 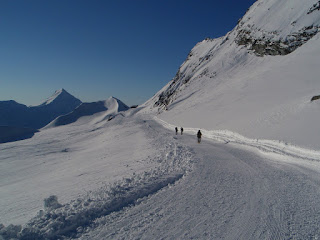 Two ours after leaving our hut, we arrive at Britannia’s from where we could see Alderpass, which seemed at the beginning not so far. We needed for hours more to complete what it seemed an easy walk. 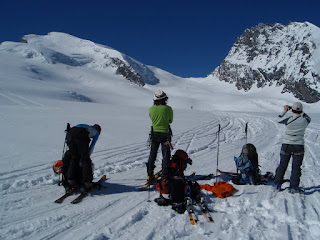 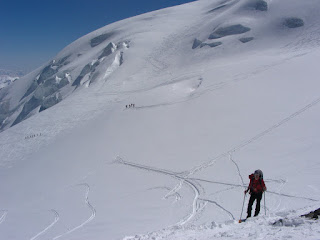 I arrived at the col completely exhausted (while Sam was still dreaming with Starlhorn!!!) but we forgot about climbing the peak and we started the best descent I have ever done. Not for the quality of the snow, but for the views it had!! 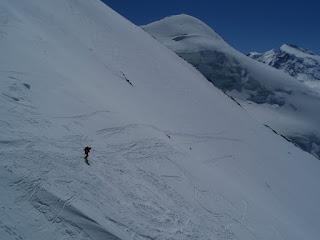 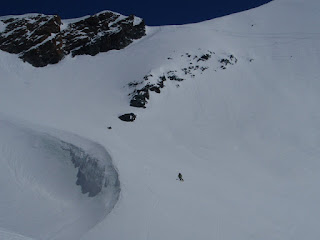 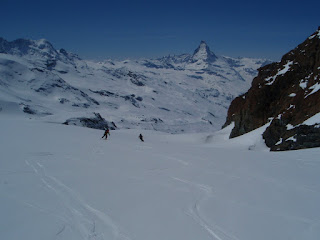 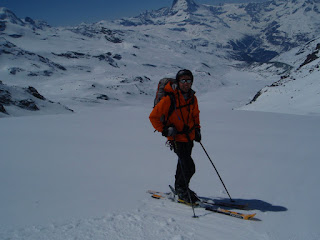 Once on the ski tracks it was difficult for us to find the correct way and we needed almost a bit more that one exhausting hour in flat terrains in the middle of the forest until we arrived at some train station in the middle of the mountain. We decided to take it because from up there it seemed that there was not enough snow in the lower part. 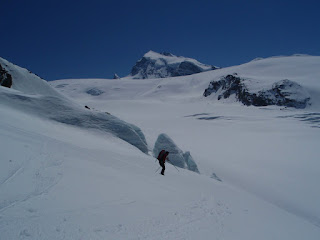 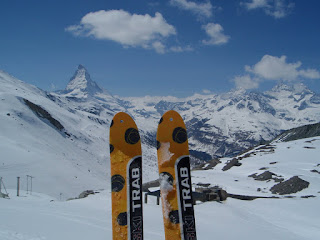 The train left us in the middle of the lovely village (Zermatt) where Ajda buy us some drinks before taking the train back to Tasch. 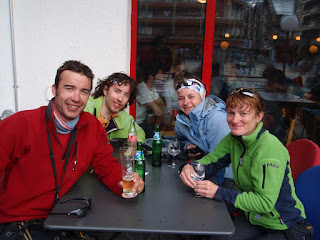 Once there we got in Sam’s car. Again the four us of us with all our equipment inside a car. We picked Vesna’s car and although we wanted to plant our tent somewhere and save some money, we decided for the hotel option where Sam showed us his cooking abilities and after the dinner we went to sleep. 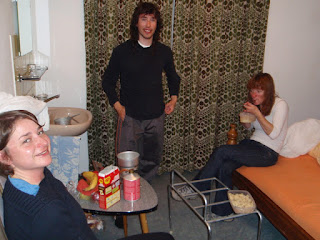 Next morning we enjoyed the breakfast and say a sad goodbye to the girls and headed towards Girona, where we arrived 10 hours after.
Ajda, Vesna, Sam & Joel
Publicat Traçant somnis en 16:13